All serious long range shooters are aware that bullets have a ballistic coefficient, and that it’s somehow related to how much the bullet will drop and drift in the wind. Shooters place various degrees of importance on knowing the exact BC of their bullets, and shooting bullets with high BC’s. In this paper, I want to explore some of the benefits of knowing precisely what the BC of their bullet is, and also, the different methods available to determine the BC of a bullet. The main point of this writing is to show that BC’s can be measured from firing tests more easily, and with less error than is commonly thought.

First, why is it important to know the precise BC of your bullets?

Well, for many shooters, it isn’t. Those who shoot targets at known distances with sighter shots allowed don’t necessarily care about calculating drop and drift precisely. We just take a couple sighters, and adjust from there. Good chance we use the sighters to foul our barrel after a cleaning anyway. So to long range target shooters, knowing BC is only important as a means to compare bullets to see which has the higher BC.

However, not all long range shooting is done at known distances. Long range hunters and snipers care a great deal about knowing the exact BC of their bullets, because they use that information to calculate drop and wind drift for the all important first shot kill.  Most live targets don’t allow many sighter shots.  Now there are a lot of things that have to be calculated in order to predict the drop of a bullet at long range. The BC of the bullet is at the top of a long list of variables including: atmospheric conditions, muzzle velocity, range to target. Even the inherent potential accuracy of the program you’re using to calculate the trajectory can be a limiting factor (see How External Ballistics Programs Work).

In the following paragraphs, I’ll explain the pros and cons of the options available for determining BC. Note, these are different than the methods available for calculating trajectories. The methods below figure out BC, then the BC is entered into another program that calculates trajectories, based on BC.

larger projectiles from the 20mm thru 155mm diameter range. The consequence is that the aero coefficients

So you see, with all of the available methods to calculate cd (let alone other aero coefficients), there are many considerations to be made. And each method is good at some things, poor at others. Some require much more knowledge and resources from the user.

Even when each method is used properly, you will have variation in the predictions for Cd and other aero coefficients (BC relates directly to Cd). Cd may be within +/- 10% between methods, but some of the more difficult coefficients can be estimated as differently as 50 to 100% different! Those ones are relatively small in magnitude, which makes them hard to calculate, and less consequential. An exception is the case of the transonic black powder ballistics where dynamic stability relies heavily on Magnus moment, which is very hard to calculate, especially in the transonic region.

Bottom line is, when it comes to BC, test firing is the best way to go if your goal is accuracy. Some people worry about the ‘pitching and yawing’ motion induced to different degrees by individual rifles. I’ve modeled this effect and have concluded the following:

Drag does go up when the bullet is pitching and yawing. However, the levels of pitch and yaw that are NORMAL for modern rifles is TOO SMALL to effect the measured drag.

What I mean is, a bullet will typically emerge from the muzzle with less than one degree of ‘yaw’. This small yaw level contributes less than 0.1% to the total cd

of the bullet. How do I know that the typical yaw level has to be small? Because if it wasn’t, it would be IMPOSSIBLE to shoot groups under 1 MOA.

I think that if it’s done carefully (carefully measured distance and atmospheric properties) that shooters could conduct simple firing tests over 2 chronographs , separated by 100 to 200 yards, with large screen spacing.

Measured velocity drop could be correlated to actual BC VERY accurately.

Below are some modeling results that illustrate my point about how yaw levels impact BC. All of the data is for a 155 grain Palma bullet, fired at 2950 fps at various levels of yaw. The plots illustrate the effects on: pitching and yawing, total angle of attack, Cd, 100 yard dispersion and velocity. 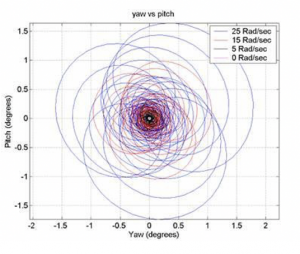 This second figure below is showing essentially the same data as the first plot in a different way.  This plot of total angle of attack is the combined plane angle that the bullet is flying at, as a function of range. In this plot, you can see the max angle of attack for each initial yaw rate, and you can see the bullet ‘go to sleep’ as it goes downrange to about 130 yards. 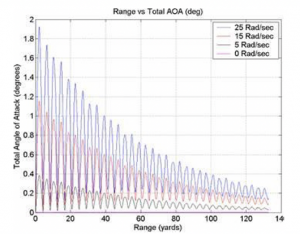 This next figure below shows how the pitching and yawing affect the Cd of the bullet. Cd is directly related to BC. You can see that for the highest levels of yaw, the Cd is affected the most, but Cd is only raised a very small percentage above the zero yaw case. 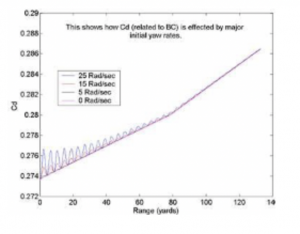 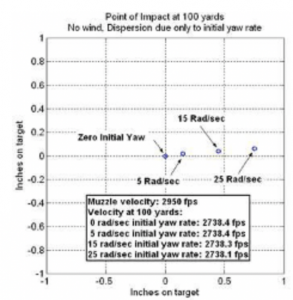 In other words, the distance from center for each of the impacts could be that far from center in any direction on the target. For example, notice that the 25 rad/sec initial yaw rate impact point is about 0.75 inches to the right of center. That means that if your rifle were producing yaw rates of up to 25 rad/sec in a random direction, that you couldn’t shoot smaller than a 1.5 inch group. Well, we all know that 100 yard groups near 0.5 inches are relatively common. So there are two conclusions to draw:

My overall conclusion of the preceding analysis is this:

Shooters can conduct firing tests between two chronographs to measure BC and not worry about the pitching and yawing motion of the bullet affecting their measurements.

If you do decide to conduct such a firing test for the purpose of measuring your bullets BC, be mindful of the following items:

Know the uncertainty of your chronograph readings.