In the past two months, I’ve presented ballistic coefficient test results for two popular Palma bullets; the Berger .308 155 grain VLD, and the Sierra .308 155 grain Matchking. This month, I will conclude the series on Palma bullets by looking at the Lapua .308 155 grain Scenar which has the highest advertised BC of any Palma bullet. Is it really as good as Lapua claims? Let’s find out. 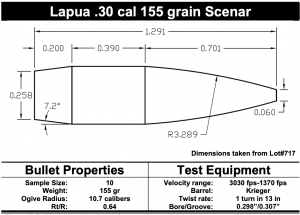 Figure 1 shows my dimensional measurements of the bullets that were tested. The ogive of the Berger and Lapua bullets are very similar. The nose of the Berger is only 0.023” longer. The Rt/R is the measure of how ‘secant’ the ogive is. The lower the number, the ‘pointier’ the nose is. The Rt/R for the Berger is 0.51 and it’s 0.64 for the Lapua, which is a pretty close match. The meplat (bullet tip) was 0.010” larger on the particular lot of Berger bullets that I measured than the Lapua bullets.

So the noses of the Berger and Lapua bullets are very similar. The big design difference between these two is the boat-tail. The Berger has a shorter, steeper boat-tail than the Lapua. As I test more and more bullets, I’m beginning to notice that boat-tail angle has a major effect on bullet drag and BC. If a boat-tail is too steep, it is completely ineffective at reducing base drag. How steep is ‘too steep’ depends on the caliber and length of the boat-tail. The longer, shallower angled boat-tail of the Lapua bullet should be more effective at reducing base drag than the shorter steeper boat-tail on the Berger. I would expect the difference in boat-tail design to give the Lapua a small advantage in BC. Let’s take a look at the measurements. 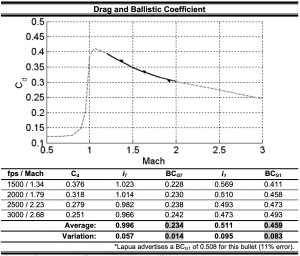 The first thing to note on the plot is how tightly packed the data points are. Remember, there are actually 5 data points in each of the 3 clusters you see on the drag curve. This is considered very clean data by any standard.

Another thing to note is that the G7 form factor (i7) is very close to 1.0, with little variation. That means that the Lapua bullet is shaped almost exactly like the G7 standard projectile.

A final thing to note is that the measured G1 BC of .459 falls quite short of the advertised BC of .508. There is an argument to be made that the advertised BC is for high speeds only, in which case it’s not as far off. I’ve beaten this topic to death the past two articles, so I’ll not go into it again. I’ll just give my standby advise to use the G7 BC because it is less dependant on velocity and results in more valid comparisons and more accurate trajectory calculations for long range bullets. 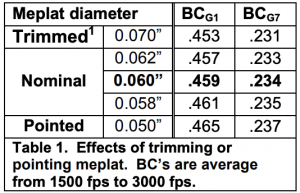 Now that I’ve presented the individual test results for three bullets, it’s time to put them up against each other to see how the performance compares.

Assuming equal grouping potential for all three bullets, the most important performance measure is wind drift. Table 2 shows the wind drift calculated using the measured G7 BC’s for the following conditions: 3000 fps muzzle velocity, 1000 yards, 10 mph crosswind and standard atmospheric conditions. Table 2 includes the G7 standard projectile so that you can see how similar it is in shape to the Palma bullets tested, especially the Lapua. The G7 form factor is a measure of how the drag of the bullet relates to the drag of the standard. For example, the Sierra has a form factor of 1.095. That means the drag of the Sierra bullet is 1.095 times, or 9.5% higher than the drag of the G7 standard projectile. So how can we use the information in Table 2 to illustrate the effects of wind drift for these various bullets? For example, you can say that for every 1 mph of wind reading error, the Sierra impacts 10.7” from the point of aim, the Berger impacts 9.7” from the point of aim, and the Lapua impacts 9.3” from the point of aim. The difference doesn’t seem very big, but ask yourself how many points you’ve lost that were just outside the scoring ring. I’ve come up with a fun way to illustrate the impact of these wind drift numbers using modeling and simulation. What we really want to know is how many points a superior bullet can improve our scores by. Here’s my approach to answering that question.

1 This represents an extreme amount of trimming. The large value is given to bound all possibilities, and show the consequences of excessive trimming.

My objective is to run a simulation of a 20 shot, 1000-yard slow fire prone match. I’ll model a rifle / shooter that is capable of holding 10” groups in calm conditions, which is world-class performance. Errors in wind estimation will be the only variable causing the bullet to strike outside of the 10” X ring. The hard part is to quantify wind call errors in a realistic way. I chose to assume that wind could be estimated within +/- 2 mph, 95% of the time. For you statistic nuts out there, I’m saying that the standard deviation of wind estimation error is 1.0 mph. (+/- 2 standard deviations give you a 95% confidence interval.) Note that actual wind speed doesn’t matter. The wind could be averaging 3 mph or 20 mph. If the uncertainty is +/- 2 mph, the shooter will suffer the same amount of points dropped. A normal distribution is assumed for the wind estimation error. This simply insures that extreme error is less likely than mild error.

A ballistics program was wired to loop for 20 shots while inserting the random wind error. The same 10” grouping potential was assumed for all three bullets. The program then simply plots the impacts on a target face, and tally’s the score. Figure 3 shows the results.

This is an effective way to illustrate how the program works, but in order to really know how things would play out in the long run, many of these virtual matches need to be fired and the results compiled. The next thing I did was to program the simulation to run 100 of these virtual matches with each bullet, all with the same conditions, while inserting the random effects of wind uncertainty. The results are shown in Table 4. It’s important to understand that the information in Table 4 isn’t a guarantee that shooting these bullets will result in those scores. Remember that the assumptions about shooter ability and wind uncertainty were completely arbitrary.

Obviously, there are many problems that will cause lost points in a long-range match. Problems like inconsistent position and equipment problems including the rifle and ammunition, etc. will cause shooters to loose points. The more skill, experience and preparation a shooter has, the less these variables come into play. In the end, the biggest variable that will always plague long range shooting is wind. This is especially true in Palma competition where everyone is basically shooting the same equipment. Elite shooters are capable of consistently cleaning targets (shooting 200 out of 200) in calm conditions. When the wind blows, the winner is the shooter who drops the fewest points in the wind. This mostly has to do with the wind reading skill of the shooter/coach. However, bullet performance is a big part of it too.

It was shown that the Lapua scenar bullet does indeed have the highest BC out of all 3 Palma bullets. However, the advantage is not nearly as profound as it’s advertised to be. At +11% error, the Lapua bullet had the most error between the measured and advertised BC (The Sierra and Berger bullet had +5 to +6% error).

The design of the Lapua bullet is very similar to the G7 standard projectile. This results in a very consistent G7 form factor that’s nearly equal to 1.0.

Choosing a bullet to shoot in Palma competition can be an important decision. Being restricted in caliber and bullet weight, the only thing that separates the ballistics of eligible bullets is their shape (drag). Until now, all that shooters had to go on is what the bullet makers advertise. Information that is inconsistent, referenced to an improper standard (G1), and possibly biased can be worse than no information at all. I hope my test results and explanations of alternate drag standards (G7) will help shooters better assess and choose the bullets they shoot in competition. Of course, the ultimate goal is to enhance the success and enjoyment of shooting.