Last month we took a look at the ballistic coefficient testing results of the Berger .308 155 grain VLD. The important conclusions of those tests will be repeated here for comparison purposes. This month we’re focusing on another popular Palma bullet; the Sierra 155 grain Matchking. This is the bullet that the US Palma team has been using exclusively for international competition. I don’t intend to discuss any more details of the BC testing procedures, only enough to effectively present the results. You can see the dimensions of the test specimen in Figure 1. Note that various lots of bullets can have different meplat (bullet tip) diameters. 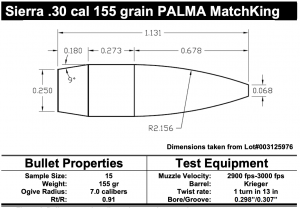 I would like to elaborate on one feature of the bullet geometry that I touched on last month, but may not be clear. The bullet ogive, pronounced ‘O-jive’, is the nose of the bullet. The ogive profile is a circular arc. The ‘pointy-ness’ of the ogive is determined by the radius of the circular arc used to create it. An ogive that meets the bearing surface smoothly (a ‘tangent’ juncture) is referred to as a ‘tangent’ ogive. If a longer radius is used to generate the ogive profile, the nose takes on more of a conical shape, and is referred to as a ‘secant’ ogive. The VLD (Very Low Drag) nose style made popular by Berger is a popular example of secant ogive bullets. In other words, VLD indicates that an ogive has a long radius, and is a ‘secant’ ogive. There are other bullets that have secant ogives, but are not called VLD only because Berger is the only company to use the VLD title. Some of the Hornady Amax, and Lapua Scenar bullets come to mind as examples of bullets having secant ogives, but aren’t called ‘VLD’s.

The measure of how secant an ogive is can be found in the Rt/R block in Figure 1. The closer Rt/R is to 1.0, the farther the bullet is from being a secant ogive. The 155 SMK bullet shown in Figure 1 is commonly known as a tangent ogive bullet, but according to my measurements, the Rt/R ratio is actually less than 1.0 (it’s 0.91). So you can draw one of two conclusions from this. Either the bullet actually has a mildly secant ogive, or my measurement is inaccurate. To be honest, both of these are equally possible. The radius of an ogive is very hard to measure accurately. It is also very hard to fabricate an ogive to an exact radius. Bottom line is, Rt/R is a measure of how ‘secant’ an ogive is (1.0 being true tangent, and 0.5 being very secant) and this parameter is important to the drag of the bullet, but is very difficult to measure accurately. Alright, enough of this ‘mumbo jumbo’, on to the results. 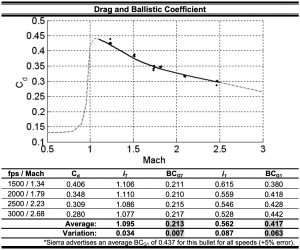 Figure 2 shows a plot of the drag curve indicating the experimental points that were measured for this bullet.

Last month, I talked about the benefits of using the G7 standard as a reference for BC instead of the G1 standard that we’re used to. The Sierra Palma bullet is yet further proof of this. If you compare the variation of the G1 BC to the G7 BC, you can see what I’m talking about. The average G1 BC for 3000 fps to 1500 fps is 0.414 but it varies from .377 to .438. That’s 18% variation. The average G7 BC is .212, but it only varies from .210 to .215, which is only 2% variation! By using the G7 BC, the variation of BC with velocity is almost entirely removed. As a result, more valid comparisons can be made between bullets BC because the velocity doesn’t make a difference. Also, more accurate trajectories can be computed when using BC’s referenced to the proper standard.

In Figure 2 I state that the advertised BC of the Sierra bullet is .437. Some people are under the impression that the advertised BC of this bullet is .450. However, Sierra only claims that .450 is the BC for speeds above 2600 fps. The problem is that for a long range trajectory, the Palma bullet is only above 2600 fps for the first 200 yards or so. If you predicted wind drift at 1000 yards with a BC of .450, you would be way off. When shooters look for a BC to enter into a ballistics program, many times they don’t know to use the average BC for their speed range. Looking closely at how Sierra advertised BC for the Palma bullet, you can see they have multiple BC’s for different speeds. If you’re calculating a long range trajectory, you have to either put in multiple BC’s (if your program allows) or average the BC for the expected velocity range. This is the confusion I’m talking about with the G1 standard. A much better way is to use the BC referenced to the G7 standard. The number is not nearly as sensitive to velocity. In fact, it’s 10 times less sensitive for the Sierra, and 14 times less sensitive for the Berger 155 VLD from last month. This is a big deal when calculating trajectories and when comparing different bullets for BC. Another great thing about using G7 BC’s is that most ballistics programs are already capable of accepting G7 numbers. Usually, you just select G7 instead of G1 in a menu, and the program chugs right along. One problem with using G7 BC’s is that they aren’t available for all bullets. This is a problem that I am motivated to solve.

Table 1 shows the effects of meplat pointing and trimming. Some explanation is required about the effectiveness of pointing for the Berger VLD versus the Sierra bullet. 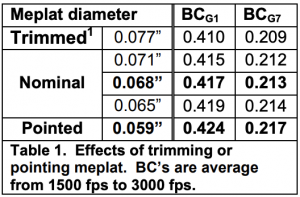 The pointing die contains an insert that squeezes the meplat of the bullet down to a smaller diameter. The objective is to reduce drag, which it does. Just how much drag is reduced depends on:

1. The caliber of the bullet and the shape of the nose, specifically the length the bullet ogive radius (ie, how ‘secant’ the ogive is).

2. How big the meplat is to begin with.

You may remember from last month that the BC of the Berger was improved by 3.8% by pointing the bullet meplat down from 0.070” to 0.053”. According to Table 1, the BC of the Sierra is only improved 1.7% by pointing the meplat down from 0.068” to 0.059”. It’s impossible to point the Sierra meplat down as much as the Berger because of the shape of the pointing die insert and the nearly tangent ogive of the Sierra bullet. The 3.8% increase in BC for the Berger results in 10” less drop, and 5” less drift in a 10 mph cross wind at 1000 yards. The 1.7% BC increase for the Sierra results in 8” less drop and 3” less wind drift in the same conditions. To summarize the effectiveness of meplat pointing, we can say that the increase in BC that is possible depends on the specific shape of the bullet’s nose, and how well suited the insert in the pointing die is for that shape. I completely expect experimentation to begin (if it hasn’t already) on various pointing inserts that are optimized for various ogive shapes and calibers.

Now that the BC of two popular bullets has been accurately measured, we can make a fair comparison of their performance. The most important measure of performance for Palma shooters (aside from grouping potential) is how much the bullet’s drift in the wind. Table 2 is really two comparisons in one. First, it’s comparing the performance of the two bullets in terms of drop, drift, and remaining velocity. Table 2 is also comparing the numbers predicted by the advertised G1 BC’s, versus the measured G7 BC’s.

1 This represents an extreme amount of trimming. The large value is given to bound all possibilities, and show the consequences of excessive trimming.

The following conclusions can be made about wind drift from Table 2.

In fairness to Sierra, I have to admit that the number used as their advertised BC (.450) is not all they advertise, but it’s what most people use when comparing and calculating trajectories for Sierra bullets. My comparison of advertised vs measured isn’t just comparing the impact of the BC being inaccurate, it’s also factoring in the confusion of a velocity dependant BC. If one were to use the average of the Sierra BC’s (.437) instead of .450 for the ‘advertised’ Sierra BC, the Table 2 comparison would still have error, but it wouldn’t be as bad. Bottom line is: reduce confusion by using the G7 BC.

Notice that both bullets tested had a measured BC that was 5-6% lower than advertised. One might suspect that there is some bias in my measurement procedures that causes this offset. I have done enough tests on various bullets that I can say this is not the case. The comparison between measured and advertised BC’s varies, as we’ll see next month.

It’s a fairly well known fact that Sierra test fires their bullets for BC, using a procedure similar to mine. The main difference is that instead of shooting over 600 -1000 yards to get data on the bullets at all velocities like I do, Sierra fires reduced charge loads at short range in order to get the low speed data. Both are valid methods of measuring BC. So why doesn’t my measured BC match Sierra’s BC? I’ve heard from several sources that the BC testing that Sierra did on this particular bullet was done a long time ago. Some time after the testing was completed, Sierra changed the shape of the dies used to form the nose of the bullets. The new bullets have a shorter nose than the older ones that were tested. Sierra has not updated the advertised BC from the old nose style to the new, which explains the 5% discrepancy between my measurements and Sierra’s measurements. In other words, our test results are for different bullets. I can say that for most Sierra bullets, my measurements agree very well with Sierra’s test results. At 5% error, this particular bullet’s BC is an exception, and there’s a good reason for it.

The advantage of using G7 BC’s over G1 BC’s was illustrated with several examples.

The effectiveness of meplat pointing was shown to vary for the Sierra and Berger bullets due to how well the pointing insert is suited to the shape of the ogive. A BC improvement of 1.7% was demonstrated for the Sierra, while a 3.8% increase was achieved for the Berger.