This work was done to investigate a question about the grouping ability of rifles at various ranges. Many shooters, including myself, have observed the strange phenomenon of a rifle that groups angularly smaller at long range than short range. In other words, a rifle that groups 1” at 100 yards grouping 1.5” at 200 yards (you would expect no less than 2” at 200 yards). There are abundant theories about why, how, or even if this phenomenon actually happens at all. The scope of this paper is to focus in on one mechanism that’s been used to explain this phenomenon: the mechanism of epicyclic swerve. Epicyclic swerve is the technical term for the corkscrew path that a bullet flies as its nose precesses around the flight path.  Some people think that epicyclic swerve explains the observed phenomenon of angularly smaller groups at longer ranges.

In this paper, I’ll present the results of modeling epicyclic swerve to find out if the theory holds water.

Several years ago, I wrote a 6-degree of freedom ballistic computer program to simulate flight dynamics like epicyclic swerve. I modeled some shots, trying to find out what was the cause of the non-proportional dispersion. I got nowhere. Basically, I couldn’t find any initial conditions that would result in non-linear dispersion.

After reading a thread on one of the online shooting forums, I decided to try again. This time I built a wrapper for the program that would automatically loop and select slightly different values for certain initial conditions on each shot. For example, I can specify the average and standard deviation of the muzzle velocity. I paid most attention to the initial pitch and yaw rates. These are the rates that get randomly aggravated by muzzle blast, barrel whip, etc. The pitch and yaw rates were randomly selected from a normal distribution. A wide range of averages and variances were tried. Each time, the result was the same: linear dispersion at each range. Epicyclic swerve was present, but at a very small magnitude, with a radius less than 0.05”.

I re-read the section in Modern Exterior Ballistics about epicyclic swerve. The part that jumped out was where the author (Bob McCoy) says that the radius of the corkscrew motion is usually less than one caliber, whereas the aerodynamic jump is many times greater, and causes dispersion that is proportional to range (linear). In other words, if the initial pitching and yawing is aggravated randomly by muzzle blast, if you get a 1.5” group at 100 yards that increases to 3.0” at 200, etc, only 0.03” of that dispersion is due to epicyclic swerve.

I thought there must be some set of initial conditions that maximizes the epicyclic swerve to be greater than 1 caliber, while preventing the aerodynamic jump dispersion from growing wildly. I tried using a large constant value of pitch rate, and varying slightly from the elevated average for several groups. I tried many different things like this, simulated hundreds of 5, 10, and 20 shot groups. Nothing produced smaller angular groups at longer range.

I learned a lot about epicyclic swerve from this project. The bottom line is that epicyclic swerve cannot cause smaller angular groups at longer ranges. The reason is because it’s so small. The main reason it’s small is because the bullet is precessing (coneing) too fast for the nose to steer the bullet very far off course. The nose of the bullet will usually trace out a complete circle in less than 10 yards for a dynamically stable bullet (one that will settle to zero coning motion after a disturbance, or ‘go to sleep’). Even dynamically unstable bullets like the Sierra 30 cal 168 gr MK complete cycles in less than 50 yards.

The greatest corkscrew radius happens when:

Every realistic set of conditions I could think of were varied in an attempt to produce maximum epicyclic swerve. I even artificially increased the lift coefficient by 200% trying to get a larger radius. No dice.

project. This round was simulated at 2820 fps with an initial pitch rate of 25 rad/s. As the bullet ‘goes to sleep’, it takes about 8 yards to complete a cycle (cone) as the bullet approaches 100 yards. In order to get a radius of 0.5 inches from that corkscrew geometry, the bullet would need to generate about 620 g’s of lift! (perpendicular to the flight path) Needless to say, that’s not going to happen. Air-to-air missiles with fins and small wings generally produce max lift of less than 50 g’s, with a structural limit around 35 g’s, and they’re made to turn. However, by generating a more realistic 2 g’s of lift, the bullet produces a 0.02” radius, which is what was observed in the simulation.

As illustrated in the example above, one cannot expect a large (greater than 1 caliber) radius for the corkscrew because the bullet just doesn’t have the lift.

Here are a couple plots from the simulation showing the pitching and yawing motion of the bullets that were modeled for this project.

This one is the 30 cal 168 gr SMK. I ran the flight conditions McCoy used in Modern Exterior Ballistics: 2600 fps, 1:12 twist, 25 rad/s initial yaw rate. I have about the first 15 to 20 yards of flight here. This was run partly to make sure that I got a pattern for this bullet that’s similar to the one that Bob McCoy shows in his book “Modern Exterior Ballistics”. The match is perfect. 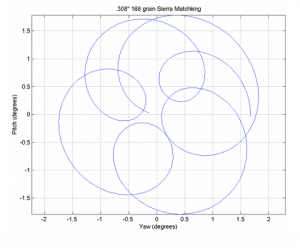 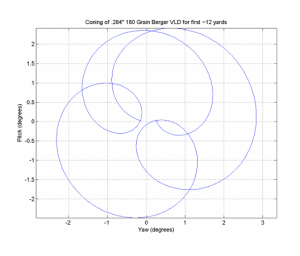 Finally, the same shot for the Berger, only this time out to 110 yards. 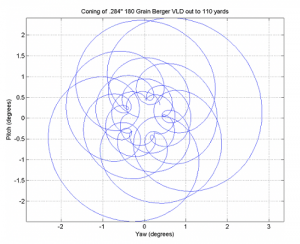 Just to be clear about the conclusions of the modeling: The phenomenon of smaller angular groups at longer ranges was not disproven. The only thing I’ve shown is that if the phenomenon actually happens, epicyclic swerve is not the cause of it.

Here is a video that illustrates the mechanism of epicyclic swerve dynamically http://www.youtube.com/watch?v=KH9SCbCBHaY