In 2009, Berger Bullets introduced G7 BC’s for boat tail bullets. For those who are unfamiliar with G7 BCs, it’s simply a Ballistic Coefficient referenced to the G7 standard projectile instead of the G1 standard projectile. The G7 standard is a better match for modern long range bullets, so the G7 BC will be more constant over a wide range of velocities compared to a G1 BC. Please refer to the 2009 weblog article: New Link TBA for the complete explanation of the benefits of using G7 BC’s.

Since 2009, many shooters have realized the benefits of G7 BC’s thru more accurate trajectory predictions. The objective of this article is to highlight another empowering analysis feature of the G7 paradigm: form factors.

How Sectional Density and Form Factor comprise BC

As an example, consider the .30 caliber 175 grain VLD Target pictured below next to the G7 standard projectile.

I apologize for the math involved in this explanation, but please stick with me. I promise it will be worth it! 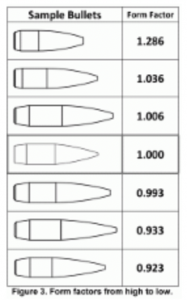 Getting a feel for form factor

The following table will broaden the application of form factor to several other bullets that have different profiles with different amounts of drag.

The first bullet that appears at the top of the chart has a very short boat tail, and a short ogive with a wide blunt tip. This bullet has a form factor 1.286, or 28.6% more drag than the G7 standard shown in the middle of the chart.

The next bullet down has a longer nose (lowers drag), with a smaller diameter tip (also lowers drag), but still has a relatively short boat tail. This bullet has a form factor of 1.036, or 3.6% more drag than the G7 standard.

The next bullet down has a long nose and boat tail. Note that the length of the bearing surface is unimportant to the bullets drag and form factor. Only the nose length, nose profile, meplat diameter, boat tail angle and boat tail length dictate what the drag and form factor of the bullet will be. This bullet has a form factor of 1.006, which is only 0.6% more drag than the G7 standard; essentially identical. Since this bullet has a form factor so close to 1, it will have a G7 BC that’s very close to its SD (because BC = SD/form factor).

Next down is the G7 standard. The weight and caliber of this bullet is unimportant in this analysis of form factors.

Next is a bullet with a very long secant nose, small meplat and long boat tail. This bullet has a G7 form factor of 0.933, which is really very low drag. The last bullet has a nose and boat tail very similar to the bullet just above it, but has a form factor of 0.923. That’s 7.7% less drag than the G7 standard and is considered very good.

Applying the knowledge of form factors, or: “What’s it all mean?”

For those who’ve stayed with the conversation this far, thank you. Your long attention span is about to be rewarded!

We’ve discussed what the G7 form factor is: a factor that relates the drag of any bullet to the drag of the G7 standard projectile. So why is it so important to have an awareness and understanding of form factor? Isn’t this what BC’s are for; to be able to make comparisons between bullets using a single number? It’s true that BC is a useful measure of merit for ballistic performance, but there’s a problem with using BC’s alone to assess ballistic performance. The problem with BC’s is that they combine the effects of mass and drag into one number. So if a bullet has a high BC, you don’t know if it’s a medium weight bullet with very low drag, or a heavy bullet with high drag. The reason this is important is because if a bullet has a high BC just because it’s heavy, it will suffer from having a depressed muzzle velocity, and performance will not be as good as the high BC implies.

To illustrate the importance of this, consider two .30 caliber bullets. One is 175 grains with a very low drag profile (low form factor). The other is a 190 grain bullet that is a higher drag profile. Both bullets have the same BC. What bullet would you rather shoot, and why?

In this example, the obvious choice is the 175 grain option because you will get higher muzzle velocity and still have the same BC.

Looking over the line of Berger Bullets, examples of low form factor bullets are:

If you’ve ever heard someone make a comment to the effect of: “it’s a high BC bullet for its caliber and weight“, what they’re essentially saying is that bullet has low drag, and a good (low) form factor. These are the bullets you want to identify because they will give the best ballistic performance, regardless of what weight or caliber the bullet is, and what MV you can achieve with it.

Bullet mass basically trades retained velocity for muzzle velocity, which is essentially a wash in terms of ballistic performance. However, low drag makes a bullet of any weight more efficient at any velocity.

If you’re wondering how to figure out the G7 form factor of various bullets, it’s quite simple. Just divide the sectional density by the G7 BC. For example, consider the .30 caliber 175 grain bullet used earlier in this

Currently, Berger is one of the few bullet companies that provide G7 BC’s for their bullets. However, I’ve published a book that has experimentally measured BC’s for over 235 bullets from many brands, including their G7 form factors. If you want to save yourself some time doing calculations, you can pick up the book to see a tabulated list of all measured bullets with their G7 form factors.

This table shows the basic metrics for all Berger Bullets that have G7 BC’s (bullets with boat tails). 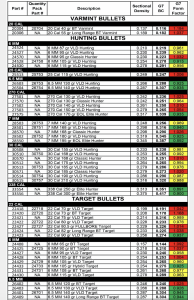 You’ll notice that the sectional densities and BC’s vary a great deal for all these bullets because of the different weights and calibers. It’s impossible to know from the BC alone if a bullet is a good bullet for a particular caliber and weight.

However, the form factor is unrelated to the caliber and weight, so it clearly indicates the merit of the bullets profile, as it relates to low drag and ballistic performance.

Bullets with form factors in the green category are extremely low drag and quite rare among the many various brands of long range bullets. You can see that Berger’s line has the highest concentration of ‘green’ in the 6.5 and 7mm calibers. That is one reason why these calibers are so successful at long range, because they have bullets with relatively high BC’s for their caliber and weight; which is a direct effect of the low form factor (low drag).

Next time you’re considering the performance potential of a bullet for long range shooting, be sure to ask yourself how the form factor compares to other bullets in its class. Look for more low form factor/high BC bullets to be made available from Berger in the coming months and years.