Properly Using your Applied Ballistics Kestrel in the Summer Heat

Just like anything else that is left in the sun, the Kestrel can be subjected to solar heating. Just like a rifle left on a shooting mat 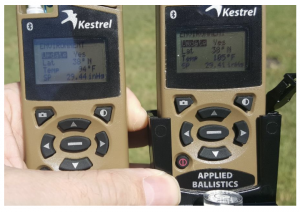 in the hot sun, you need to be aware of what this can do to your Applied Ballistics Kestrel and the firing solution. To demonstrate this, I placed the Kestrel in a wind vane mount. I also placed a Kestrel in the shade in a wind vane mount. The Kestrel in direct sunlight was reading 11 degrees higher after 20 minutes, than the Kestrel in the shade. This Kestrel was in a open air with a steady 3mph wind. The Kestrel itself was 122 degrees. Remember the outside temp was only 94 degrees at the time, which the Kestrel that was in the shade read properly. That was also not during the heat of the day, and the day I ran this happened to be the coolest we had in weeks. It was 94 degrees at 1300 and 95 degrees by 1330.

Keeping this in mind, other factors can also influence the readings you get. If you are firing from an unorthodox location such as a hot roof, a non-insulated building, the deck of a ship, on top of or inside a vehicle. All of these things, for instance the inside of a un-armored vehicle reaching 140 degrees F (60 Celsius) or the inside/roof of an armored vehicle reaching 15 to 20 degrees Fahrenheit hotter than that, the shooting location may not reflect your environment. So what can we do, if we know we are going to be leaving our Kestrel in a location, a hot shooting mat, which could cause undesirable readings? We can take readings and then turn the environment off. You will notice in this photo, I am in AB Mode and the Environmental Screen. You will also see it says Update and Yes. With Update highlighted as in the photo, simply press the right button to turn it off, and it will lock in your last reading. Once it is locked you can also manually change the environmental factors. If it has been 20 or 30 minutes, or you have moved to a new firing location, and you want to update these factors, simply switch it back to yes.

With any of the Applied Ballistics Apps, Kestrel Companion and/or Companion Pro software, you can lock them in by turning update to No, then you can leave your Kestrel in the tripod mount, with Wind in capture mode, and your environmentals will not be adversely affected, but your wind will still give you a live reading. Once you want to update these, turn the update to Yes. Take the Kestrel by the Lanyard, and swing it over your head for 20 seconds, then watch for it to stabilize. Once you have a good reading, turn it back to No, and place it back in the Wind Vane Mount, or return to your shooting position. This can be useful for other applications, such as firing from a hide, or a building that is not heated/cooled. Get your atmospherics from time to time, then turn them off, and you have locked in your outside atmosphere. Return to your firing position, and you don’t have to worry about the temperature difference from outside to inside interfering with your ballistic solution.