Transonic Effects on Bullet Stability & BC 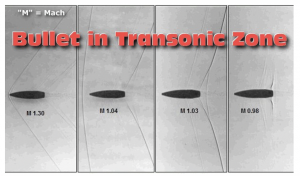 These four photos show the substantial changes in the shock wave and turbulence patterns for the same 7.5mm bullet at different velocities. The “M” stands for Mach and the numerical value represents the velocity of the bullet relative to the speed of sound at the time of the shot. Photos by Beat Kneubuehl.

“Going transonic” is generally not a good thing for bullets. The bullet can lose stability as it enters the transonic zone. It can also become less slippery, losing BC as a consequence of dynamic instability. In this video, Bryan Litz of Applied Ballistics analyzes what happens to bullet stability (and BC) as projectiles approach the speed of sound. Transonic effects come into play starting about Mach 1.2, as the bullet drops below 1340 fps. 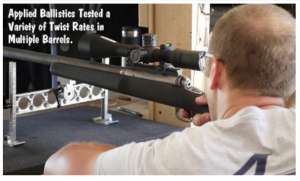 To determine how bullets perform in the “transonic zone”, Bryan did a lot of testing with multiple barrels and various twist rates, comparing how bullets act at supersonic AND transonic velocities. Bryan looked at the effect of twist rates on the bullets’ Ballistic Coefficient (BC). His tests revealed how BC degrades in the transonic zone due to pitching and yawing. Bryan also studied how precision (group size) and muzzle velocity were affected by twist rates. You may be surprised by the results (which showed that precision did not suffer much with faster barrel twist rates). The results of this extensive research are found in Bryan’s book Modern Advancements in Long Range Shooting.

Bryan notes: “A lot of gunpowder was burned to get these results and it’s all published in layman’s terms that are easy to understand”. If you’re interested in learning more about transonic bullet stability, you may want to pick up a copy of Bryan’s book.