The 300 Winchester Magnum is a well established cartridge in the US arsenal. Recent modernization initiatives focused around rifles and ammunition are advancing the effectiveness of this proven cartridge. This Weapon Employment Zone (WEZ) analysis [REF 1] is intended to quantify how the hit percentage of the 300 Winchester Magnum is improved thru these modernization efforts. Primarily the ballistic performance of various ammunition types will be evaluated.

For purposes of this analysis, the muzzle velocities from the 24″ barreled (suppressed) XM2010 will be considered most relevant, and therefore used for all calculations.

The A191 (MK248 Mod0) and Mod 1 rounds are fairly well known and have often been compared against each other [REF 3]. For purposes of the present analysis, an additional ammo type is proposed for comparison, namely 230 OTM. This proposed round will be considered in relation to the other familiar ammo types in several environments to see how the hit percentages compare.

Before proceeding to the actual WEZ hit percentage analysis, Figure 1 shows dimensioned drawings of the 3 bullets under consideration. 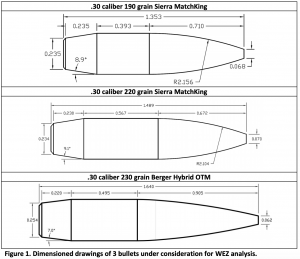 It’s clear from the dimensioned drawings that the 190 and 220 grain SMK’s are very similar bullets, with the only major difference being the length of the bearing surface. The relatively blunt nose results in G7 form factors [REF 2] of around 1.06 for both of the SMK’s. By stark contrast, the Berger 230 grain OTM has a much longer nose with a tighter meplat diameter and a optimal 7 degree boat tail. The G7 form factor of the Berger Hybrid OTM is 0.91, which indicates 15% less drag than the SMK design. This 15% drag reduction, in addition to being heavier than both of the SMK’s results in the Berger Hybrid OTM having a dramatically higher Ballistic Coefficient (BC) and better ballistic performance.

All of the bullets under consideration are fully stable when fired from 1:10″ twist barrels.

In order to conduct a complete WEZ analysis, the 3 bullet options will each be evaluated for hit percentage in various uncertainty environments. The intent of the different uncertainty environments is to determine how hit percentage is affected in relation to the variables commonly encountered in real world shooting [REF 1]. Atmospheric conditions will be modeled as ICAO standard sea level values1 . Other uncertainties will be modeled in 3 confidence sets; high, medium and low, according to Table 2. The high confidence uncertainty set is intended to model a highly trained shooter with a laser rangefinder, 1/2 MOA rifle, and ammunition loaded with 10 fps Standard Deviation (SD) in muzzle velocity. The medium confidence uncertainty set models a nominal shooter with an average ability to estimate wind speed, compromised use of laser rangefinder, average 1 MOA rifle with typical ammunition having 15 fps SD. Finally the low confidence uncertainty set represents poor wind estimation, MIL’ing targets for range, and below average rifle and ammunition. Detailed plots and tables of the hit percentage results for each uncertainty environment can be found in the Appendix.

Of course any calculated hit percentage depends greatly on the size and shape of the target. The target that’s modeled for this 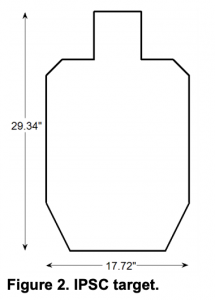 analysis is the standard IPSC silhouette target shown in Figure 2. Trajectories that intersect the target area are considered hits, those that don’t are misses. There is no consideration made for where the bullet strikes the target. The benchmark Kinetic Energy (KE) indicated on the plots is 1000 Ft-lb. The importance of this metric is debatable, but it’s shown on the plots as a reference for comparison. The benchmark Transonic (TS) speed is Mach 1.2, which equates to 1339 fps in ICAO standard conditions. The transonic speed is indicated on the WEZ plots with a TS, and all values in the hit percentage tables that correspond to velocities lower than transonic are printed in gray. 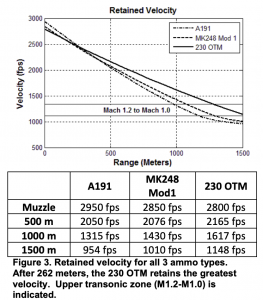 Retained velocity is an indicator of how flat a trajectory is. Flatness of a trajectory is related to danger space. Therefore we cansay the 230 OTM has the greatest danger space on any sized target beyond 262 meters if all rounds are zeroed at the same 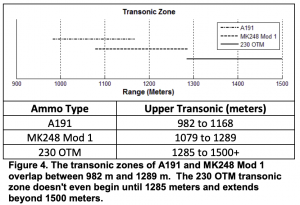 range. In addition to relative retained velocity, it’s also interesting to look at where the transonic zone falls for the three ammo types. The WEZ analysis uses Mach 1.2 (1339 fps) as a common transonic speed.

However, it can be difficult to predict the exact velocity at which transonic stability effects begin. Figure 3 indicates the zone between Mach 1.2 and Mach 1.0. This is the zone in which one can reasonably expect the onset of transonic instability effects in a sea level environment. Figure 4 shows the ranges that correspond to the upper transonic speed zone (1339 fps to 1116 fps) for each ammo type. It’s clear that the 230 OTM pushes the transonic zone much farther than either A191 or MK248 Mod1.

Note that the specific levels of retained velocity are highly subject to atmospheric conditions. The above results are all for ICAO standard sea level conditions. In environments higher above sea level, the bullets will retain velocity much better and the ranges corresponding to transonic zones can be dramatically pushed out. For example, in a density altitude (DA) of 5000 feet, the range at which the 230 OTM encounters Mach 1.2 is extended from 1285 meters to beyond 1500 meters. In other words, the 230 OTM can remain comfortably supersonic to beyond 1500 meters at DA’s of 5000 feet and higher. Ranges corresponding to Mach 1.2 for A191 is increased from 982 to 1150 meters, and for MK248 Mod1, Mach 1.2 is extended from 1079 meters to 1260 meters.

As stated in the Modeling section of this report, Kinetic Energy (KE) is a debatable measure of merit to consider in regards to WEZ. A minimum acceptable level of KE is arguable, and the importance of the metric itself is even in question. Nevertheless, KE is included in this analysis for those who wish to consider it as a relative comparison. In the WEZ plots in the Appendix, a KE 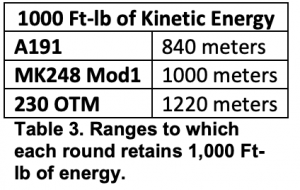 All of the conclusions discussed in this section are supported by the graphic and tabular data shown in the Appendix. It’s important to remember that the analysis contained here does not account for flawed fire solutions. In other words, average elevation and windage corrections are assumed to be perfect. In reality, this situation typically comes about only after firing a first shot, correcting, and re-engaging the target with a corrected fire solution. This is the only fair way to compare the weapon system itself without confusing the issue with uncertainties related to calculating a fire solution. It’s interesting to study the effect that fire control error has on WEZ, but that is the topic of another WEZ analysis. When the objective is to compare various ammo types for a given weapon system, the comparison should focus only on the ballistic performance differences of the ammo types; which is the sole focus of this analysis. 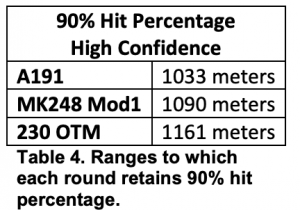 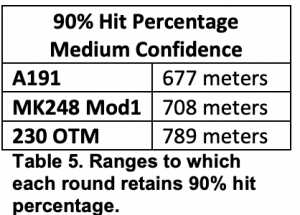 Figure 6 below shows a graphic representation of the hit percentage on the IPSC target at 1000 meters. Note that the vertical dispersion, which is primarily determined by muzzle velocity consistency is similar for all 3 rounds. This is the effect of the 15 fps standard deviation in muzzle velocity used for the medium quality ammunition.

The real difference in the shot patterns is in the horizontal plane, with the higher BC bullet having less horizontal dispersion and more shots on target in the +/- 2.5 mph wind uncertainty.

The low confidence environment models a shooter with minimal training and shooting ability in addition to ammo of poor consistency. Details of a low confidence environment are listed in Table 2. In a low confidence uncertainty scenario, 100% hit probability is limited to 300 meters for all 3 ammo types. By 1000 meters, the hit percentage is reduced to 14% for A191, 18% for MK248 Mod1, and 20% for the 230 OTM. Under such high uncertainties, hit percentages are 1500 meters are quite low for all three ammo types.

The 90% hit percentage thresholds for a low confidence environment are shown in Table 6. Table 6 shows that the 90% hit 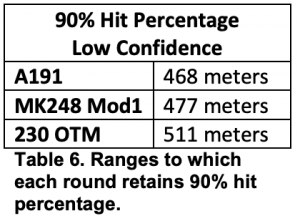 As Figure 7 shows, the overwhelming component of dispersion is vertical, which is due to the ammo being modeled with 20 fps of standard deviation in muzzle velocity. However, even with this low confidence environment, the higher performance bullets are still able to improve hit percentage to a lesser degree due to resistance to wind deflection.

Ballistic performance related comparisons are not the only considerations to be made when assessing the suitability of various ammo types. The following sections address some of the components that are not captured in the hit percentage portion of the WEZ analysis, but are none-the-less important considerations.

One important consideration is barrel life. One ammo type may appear superior on paper but if useable barrel life is so limited as to keep the rifles in constant rotation to the armory for re-barelling, then the overall effect of the superior ammo type can be more negative than positive.

Accurate formulas for calculating barrel life are not readily available due to the vast array of variables involved, variations in barrel steel, rate of fire effects, etc. In other words, the exact number of rounds a barrel will be good for cannot be nailed down precisely, but there are some rules of thumb. In general, heavier bullets moving slower will result in longer lasting barrels than lighter bullets moving faster. Bearing surface length can also affect barrel wear, especially in the throat area where the riflings engrave the bullet. Even though there are no quantifiers, the rules of thumb indicate that the 230 OTM, being the heaviest, slowest MV bullet and having a shorter bearing surface than the 220 SMK, will probably result in the longest useful barrel life out of all 3 bullets considered in this report.

The WEZ assessment is primarily a study of external ballistic performance, and hitting targets. What the bullet does after impacting the target is an issue outside the scope of the main WEZ analysis, but requires consideration in applications where terminal performance is specified.

The 3 bullets under consideration are all of similar construction: open tip, match bullets with relatively thick copper jackets and lead cores. This type of construction produces the most precise bullets available, while achieving desired terminal performance which is characterized by limited penetration at short range (high velocity) and high weight retention and penetration at long range (low velocity) impacts. All 3 of the bullets under consideration share the same materials and construction, and exhibit the same desirable terminal performance attributes.

Prior studies have conducted basic comparisons between A191 and MK248 Mod1 ammo types for use in the 300 Win Mag. The results of this WEZ analysis supports prior conclusions that the MK248 Mod1 is superior to A191 in supersonic range, kinetic energy, and hit percentage regardless of the uncertainty environment. In addition to verifying those findings, an alternative bullet option (the Berger 230 grain Hybrid OTM) was assessed and found to be superior to both A191 and MK248 Mod1 by a substantial margin. The improvement in 90% hit percentage range for the 230 OTM is about the same as the improvement of MK248 Mod1 over A191. With similar terminal performance, and potential for increased barrel life, the Berger 230 grain Hybrid OTM is the clear choice for maximizing hit percentages and extending effective range of the 300 Winchester Magnum cartridge in the XM-2010 platform. 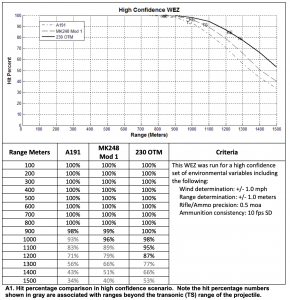 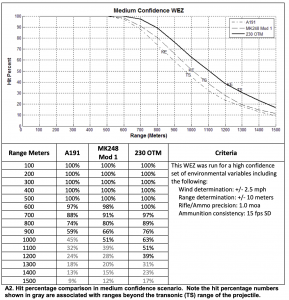 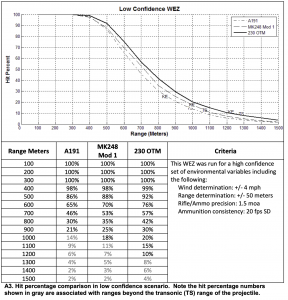