A Conceptual Overview by Bryan Litz

This paper outlines a method for systematic and comparative evaluation of small arms performance in various shooting applications. The Weapon Employment Zone (WEZ) analysis presented here is model based, and statistical in nature. The objective is to quantify the hit percentage for a given weapon system against a specific target as a function of range, considering the uncertainties involved in field shooting.

In a WEZ analysis, uncertainties in shooter skill and environmental variables are modeled to illustrate the effect on a weapon systems ability to hit a target amidst realistic field conditions. This is important because uncertainties are inevitable in field shooting and any good analysis should account for their presence and show how a weapons effectiveness is affected by the uncertainties.

The cross wind and range estimation are related to how well skilled and equipped the shooter is. For example, the most elite shooters

may be able to judge cross wind speed within

environment having good indicators. However, a novice wind reader in a difficult environment may struggle to get within +/- 4 mph.

The range estimation error is defined as +/- 1 meter for the high confidence scenario. This is consistent with a shooter using a laser rangefinder on a reflective target, within the operational range of the device. A medium confidence range uncertainty of +/- 10 meters represents use of a laser rangefinder on a non-reflective target perhaps at the limits of the rangefinders operational range. A low confidence range uncertainty of +/- 50 meters is used to model the use of ranging targets by MIL-ing or straight estimation.

The rifle/ammo precision is represented by group sizes of 0.5 MOA, 1.0 MOA or 1.5 MOA for high, medium and low confidence levels, respectively. This precision element includes the rifle and shooter’s capabilities.

1 Uncertainties represent the 95% confidence intervals assuming a normal distribution. In other words, if the uncertainty in range is cited as +/- 1 meter, it means the standard deviation of range error is 0.5 meters. The simulation will model a bell curve of range error with 67% of the estimates being within +/-

When performing a WEZ analysis, a full confidence set can be specified according to the table above, or the elements can be mixed. For example, you can look at a WEZ for a system that has high confidence cross wind and range estimation, medium confidence rifle/ammo precision, and low confidence velocity consistency for the ammo. In this way, the WEZ can be used to illustrate how much the systems hit percentage might be improved by addressing the various uncertainty components.

Of course it’s also possible to specify uncertainty levels other than those listed in Table 1. However, one of the major benefits of WEZ analysis is the ability to compare weapon systems using the same criteria, in other words; apples-to-apples. In other words, the relative effectiveness of one weapon system vs another can be more important in aiding decisions related to procurement, ammo selection, or training objectives. In this sense, it matters little what precise uncertainties are chosen, but rather how systems compare under the same conditions.

Using the WEZ analysis, it is also possible to study the effects of various other ballistics related problems like; bullet Ballistic Coefficient (BC) inconsistency, rifle cant, uncertainty in uphill/downhill look angle, etc. Furthermore, problems of accuracy can be studied to determine their effect on hit percentage (accuracy is addressed in a later section).

The WEZ analysis consists of running a ballistics program2 repeatedly with the user specified field uncertainties. Each individual trajectory is modeled with a

If the simulation is run 100 times and the specific field uncertainties result in 80 hits and 20 misses, then the result is a 80% hit percentage at that range, against that target, under those specific conditions. In reality, the simulation is run 1,000 times to insure a more repeatable result. Since the WEZ approach is statistical, absolute repeatability is not guaranteed, but large sample sizes foster greater repeatability3.

Naturally the hit percentage for a given weapon system depends on the target. Any target shape can be used including circles, 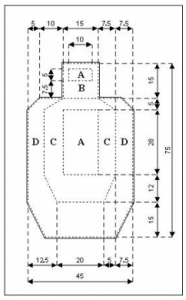 squares, etc. For the following illustration, the IPSC silhouette target shown in Figure 1 is used to model WEZ.

Figure 2 shows graphically the result of running a 1000 shot WEZ analysis for a sample rifle against the IPSC silhouette target from 100 to 1500 yards. Exact details are not important to this conceptual demonstration, only the hit-or-miss criteria is being demonstrated. Note that

2 The ballistics program being run is a version of the Applied Ballistics Point Mass Solver, specifically tailored to loop within the user input uncertainty parameters. This solver uses a 1000 Hz Runge-Kutta numerical method to solve the equations of aero-ballistic motion [REF 2] [REF 5].

hit percentage remains 100% until the range is long enough to allow the uncertainties to result in some trajectories missing the target, at which point the hit percentage falls off to less than 100%, bottoming out to 38% at 1500 yards. 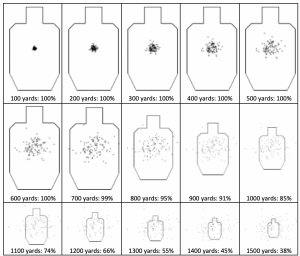 Figure 2. As the range increases, more and more shots miss the target and the hit percentage decreases. As this figure clearly shows, any WEZ analysis is highly dependent on the chosen target size and shape.

The plot on the following page shows this same type of information, condensed into a single range based hit percentage. In actual analysis reports, Figure 3 is the more practical result to consider. Figure 2 is only shown to demonstrate the conceptual nature of how the hit percentage is determined.

In addition to showing the hit percentage and how it drops off with range, the WEZ plot in Figure 3 also marks where transonic (TS) and kinetic energy (KE) values are reached. The merit of KE as a measure of importance is debatable, but the TS range is an important landmark range due to the effects of transonic instability that’s possible with many bullets and the difficulty in predicting trajectories beyond that range. In other words, when a projectile falls below TS

speed, depending on the particular bullet and atmospherics, it may become unstable and tumble which renders the weapon useless beyond that point [REF 1]. Hit percentage tables that extend beyond the TS range will appear in grey to indicate the overwhelming uncertainties of transonic performance on the WEZ modeling. When hit probabilities appear in grey, they can be interpreted as being between that number and zero.

Figure 3. This plot and table shows the hit percentage as a function of range. This is the same information gathered by the method illustrated in Figure 2, but in a more analytical form.

Of course there is great value in quantifying the hit percentage of a given rifle/ shooter/ ammo combination in a specific uncertainty environment. That information can be used to quantify sniper effectiveness in war-gaming scenarios, or help a hunter decide on what range should be considered maximum for a certain game he’s hunting.  However there is another very useful application of the WEZ analysis, and that is the comparison of several weapon systems under the same conditions. Is a .300 Winchester Magnum more capable with a medium weight 190 grain bullet, or higher BC but slower 220 grain bullet?

What is the effect in hit percentage of a 10% BC increase? How is hit percentage improved by training a shooter to judge cross wind to within +/- 2 mph as opposed to +/- 4 mph? Is the investment in more consistent ammo worth the gains in hit percentage on the battlefield? How is the hit percentage of a given weapon system affected by going from a sea level theater to 10,000 feet above sea level? Are resources better spent in providing better rifles, or better ballistic software, or more training?

The answers to these and many other important questions can be answered with WEZ analysis. Ultimately, the WEZ analysis can be used to optimize system design for maximum hit percentage in given environments which known uncertainty levels.

Figure 4. Hit percentage comparison between two bullets under similar high confidence scenario. Note the hit percentage numbers shown in gray are associated with ranges beyond the transonic (TS) range of the projectile.

Figure 4 illustrates the effect of two different bullets being loaded into the same cartridge, in the same uncertainty environment. Bullet A is a heavy, high BC, slower MV bullet, and Bullet B is a light weight, lower BC but higher MV option. It’s clear in Figure 4 that in this specific high confidence environment that both Bullets A and B maintain a 100% hit percentage out to 800 yards. Beyond 800 yards, Bullet A has a higher hit percentage. We can also see from the WEZ

plot that Bullet A maintains supersonic speed out to 1450 yards, where Bullet B only reaches 1100 yards before dropping below transonic speed.

Keep in mind that the results from this example are specific to the uncertainties under which the example WEZ was run. If the same comparison were made under different conditions; for example if the range uncertainty were great, then Bullet B might be the better option in that scenario due to being faster and flatter over short/medium range. This result exemplifies the old adage: use the right tool for the job. Just because Bullet A is clearly the right tool for this specific job (uncertainty set) doesn’t mean it’s universally the right choice in all uncertainty sets [REF 3]. In fact it is very likely that there will be a different set of circumstances in which Bullet B could be superior to Bullet A, and the WEZ analysis would show that.

Accuracy vs. Precision in WEZ Analysis

The system of WEZ analysis presented so far only addresses the effects of precision related problems. In other words, the ballistic calculations and sight corrections are assumed to be perfect, resulting in the group being centered on the target [REF 1]. However in real life this is rarely the case. 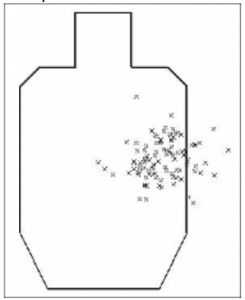 Other interesting WEZ studies can be done to look at the effects of errors in trajectory prediction (accuracy) on hit percentage.  In other words, uncertainties that will cause a shot group to not be centered on the point of aim. For example, uncertainty in ballistic program inputs including; average muzzle velocity, average BC, BC vs custom drag curve [REF 1], sight height, atmospheric temperature, pressure and humidity, even the consequences of not accounting for Coriolis and spin drift [REF 1][REF 2] can be captured in a WEZ analysis.

This type of WEZ analysis would be looking at accuracy as opposed to (or in addition to) precision limitations of weapon employment. There are many interesting analyses of each to consider. Figure 5 illustrates a situation where a weapon system has sufficient precision to result in 100% hit percentage, but due to the accuracy being compromised, the shot group is not centered and the hit percentage is somewhat less than 100%.

WEZ analysis that focus on precision related variables will be relevant to system performance, meaning the precision of the weapon system as well as ballistic performance of the ammunition. On the contrary, WEZ analysis that focuses on accuracy related variables will be relevant to elements dealing with the shooter training and proper employment of weapon systems.

There are things that can’t be captured in the WEZ analysis. For example, differences in barrel life for one rifle/ammo combination versus another. Another issue is terminal ballistic performance. Related things like this can be addressed in the body of the WEZ report because they won’t necessarily show up in the WEZ hit percentage tables.

The WEZ analysis is really about quantifying the hit percentage. Other considerations are subjects of other studies, outside the scope of WEZ.